So how can my child develop their thinking skills? This is a question that many parents want to ask. Simply put, the development of thinking skills comes mostly from daily use and practice. Today, we're going to learn one core area that will encourage all-around development of your child's thinking skills: comparing lengths. Learning to compare lengths builds up evaluation and critical thinking skills, helping children not only to actively construct their own knowledge system, but also to be able to apply that system to solve practical problems.

Being able to compare lengths is an essential part of early comparative thinking. The core of comparative thinking is finding things that are wholly or nearly the same, setting them up in a way that allows for a direct comparison, and then comparing what is similar and what is different. For example, we can compare a red pen and a blue pen - they are both pens, wholly the same in that way - but we cannot directly compare a car and a pair of shoes.

Take a look at the photo below. It's normal that a child can answer 'yes' when asked if both of these are pens. But it takes development and a bit of learned reasoning on their part to explain their similarities and differences. A good first step is to take away some of the difficulty involved in their analysis and start simply. In the photo, the pens on the left side aren't aligned; this makes comparing their lengths more difficult than necessary. Instead, align them as in the picture on the right. 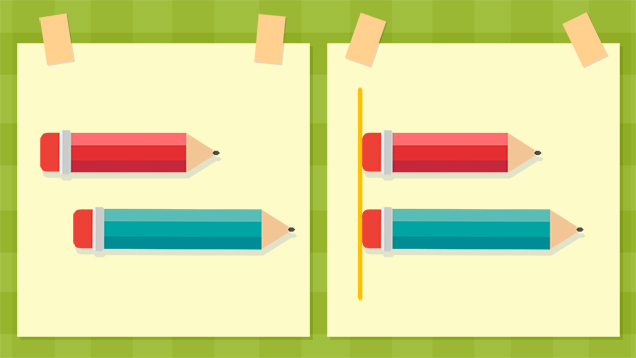 Let's see another example of 'keeping it simple.' In the photo below, the two ropes on the left aren't both stretched out to their full length. If left that way, it can lead children to believe the top rope is shorter than the bottom because of their yet-undeveloped comparative thinking skills. Remember, the core of comparative thinking involves setting these items up in a way that allows for a direct comparison. The ropes being laid out in two different ways makes that comparison harder for young children.

Using Boxes to Think Outside the Box

But how does comparing lengths foster creative thinking in children? Look at the grid above. The parameters are fixed for both sides of the picture: each character is on a grid, and each block of that grid is the same size. Your child can count the line segments to determine which line is longer - this is one application of creative thinking. Once they can do that, increase the challenge a bit and re-draw the lines, making sure each has the same number of lengths as before. This will demonstrate for your child that even if the shape of the lines change, becoming straighter or more curved, that their length has not changed. Let them draw their own line-and-grid, too, so they can experience this concept for themselves.

It's through play, practice, and first-hand experience that your child will grow the confidence, thoughtfulness, and abilities they'll use for life.